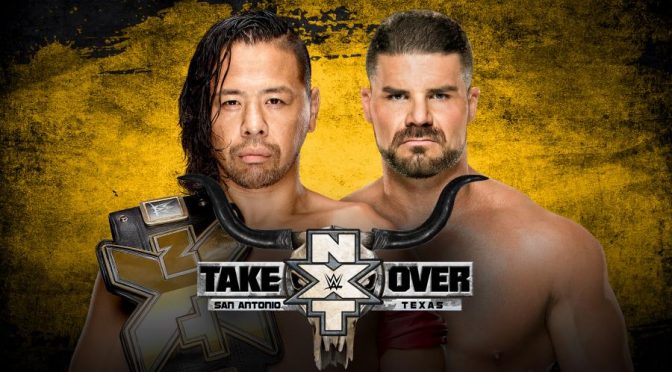 NXT Takeover: San Antonio is coming up this Saturday (Jan 28th) and here is the short version of all of the information you will need to understand what is going down.

Right now the card looks like this (in no particular order):

Here is the skinny on each of these matches:

Bobby Roode vs. Shinsuke Nakamura
Bobby Roode aka: the Glorious One is an industry veteran with over a decade of professional wrestling experience under his belt. Having most recently been a star on the WWE competitor TNA, he has come to NXT to show that he is better than everyone else. This even including him abandoning his former tag team partner Tye Dillinger when he felt he was under preforming in the Dusty Rhodes tag team classic last year. In order to win this title shot, Roode did have to compete against four other competitors including an angry Tye Dillinger and Roderick Strong and Andrade “Cien” Almas.

Shinsuke Nakamura aka: The King of Strong Style made his name in the indy wrestling circuit New Japan World (NJPW) . Most recently in NXT, he regained his lost NXT Championship Title from rival Samoa Joe. He successfully defended his title in the rematch against Joe ending their long running rivalry and is now willing to accept anyone who challenges his dominance over the NXT Universe.

The Authors of Pain vs #DIY
The Authors of Pain, twin youthful beefy boys, have been an unstoppable force since entering NXT. Still undefeated, they won the Dusty Rhodes tag team classic and have earned their selves a shot against current NXT Tag Team Champions #DIY and They look to take over as the new leaders of the NXT Tag Team division.

#DIY is the tag team of the underdogs. They won the NXT Tag Team title from their long time rivals The Revival at the previous NXT PPV.  #DIY seems to be able to work together and systematically pull victory out of even some of the toughest situations and hope to be the first team to be able to defeat The Authors of Pain.

Peyton Royce vs. Nikki Cross vs. Billie Kay vs. Asuka
Peyton Royce and Billie Kay are the alliance of Australian born divas in the NXT division. Their alliance and underhanded tactics have risen them to the top of the NXT women’s division in a championship opportunity against the current champion Asuka. What will happen to their unity in this match where only one lady can walk away the champion is yet to be seen.

Nikki Cross, now part of the anarchist group Sanity is a wild uncontrollable animal. With no loyalty to anyone outside of Sanity, her unpredictable and excessively aggressive methods have earned her this spot in the championship four way match.

The current champion Asuka, is a Japanese powerhouse. She has won over 120 matches in her stint in NXT with less than 10 defeats. Her willingness to fight any comer without question shows her the confidence she has in her ability to defeat everyone even without underhanded tactics. This match is made more interesting as even a potential alliance against Asuka from the other three competitors could throw off the current balance of power.

Eric Young vs. Tye Dillinger
Eric Young, the leader of the anarchist group Sanity (Which contains Nikki Cross and two others) demanded Tye Dillinger join his team of lackeys who are attempting to disassemble the fabric of order in the NXT Universe. Dillinger’s disrespectful denial of Young’s offer is the fuel for Young’s fire to crush Dillinger in this match.

Tye Dillinger, The Perfect 10, can not seem to catch a break. After he was betrayed by the Glorious One in the Dusty Rhodes Tag Team Championship, he has been unable to to get his revenge on Roode and was unable to earn himself a title shot for this PPV. His waning lack of confidence was starting to show and this caused Young to attempt to recruit him into Sanity. Dillinger chose to stick to his principles and believe in himself and he refused with prejudice the offer Young presented him with. This match is the aftermath of that confrontation.

Roderick Strong vs. Andrade “Cien” Almas
Roderick Strong is a veteran of the independent scene and is gaining momentum since his debut match with tag team partner Austin Aries in the Dusty Rhodes Tag Team Classic. Known for his skills with the back breaker, he hopes to rise to the top of the NXT on the fast track.

Andrade “Cien” Almas also is trying to claw his way up the NXT ladder. With his penchant for flair and showing off, he let his anger at Strong getting this match show when he attacked Strong during an interview and continued to beat on him even after he was down. Strong and Almas both lost the title match opportunity earlier against Bobby Roode and this would seem to be a match where these two men are pining for the opportunity for the next title run.

And here are the theme songs for that event: