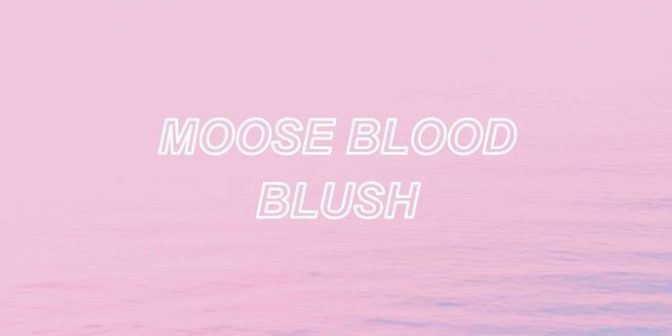 Blush isn’t an incredibly revolutionary album in the sense that it reinvents the wheel or creates its own genre, but it is an incredibly brilliant and perfectly executed emo album that I can’t stop listening to. Moose Blood’s sophomore album focuses on sounds from the 90s and 00s by creating a fresh album with catchy melodies that can communicate emotions directly to your brain, while remaining fresh and making you joyous and remorseful in the way the best emo music can. No song on Blush is a one dimensional song, it lives in the space of contradicting feelings and decisions. It breathes second guessing one’s decisions and trying to figure out how you actually feel when you aren’t sure what to feel.

One of my favorite set of emotions in music is acceptance of sad circumstances, but being able to continue on without delving into despair or self loathing. The emotion is evoked immediately on Blush on the first track, Pastel with a look at a relationship via a timeline and the longing for confirmation that the singer has made the right choices in his life. These contemplations are the things that everyone can relate to, but Moose Blood is able to boil the pondering into musical form and wonderfully relate it to the rest of us.

Most people can understand what the feeling of unreciprocated affection feels like. Even when a couple mutually agrees to break up, it doesn’t mean that was preferred by both parties. With a great pre-chorus guitar hook, Honey drives that feeling home with lyrics like, “It’s in the back of my mind, But it’s worse when I sleep, Now I’m losing my breath, And I’ll never understand how you could forget me”. The constant struggle of the mind for wanting what could have been could lead to anger, but Moose Blood keeps it positive saying that things will get better, even while dealing with the ever constant pain.

Knuckles, the third track on this album repeats one line many times. This isn’t an exercise in laziness though, it is a nostalgic desire to relive a bittersweet memory of the last interaction with someone they loved. That memory played over and over in his mind, knowing it can’t end in a positive way for him, but wishing it could have been different is one of the life’s great enigmas — what if? How that balances with his version of the way things really happened in his mind and yet realizing he wouldn’t change a thing from the moment that did happen comes across not only in the lyrics, but the delivery and melody and instrumentation, and yes — even the repetition, almost as if the singer believes what they are saying, but subconsciously wants to assure himself that it is true.

Sulk seems to be a less universally relatable situation with the singer comforting and trying to help a female friend pick up the pieces of her life after a broken friendship or relationship with a seemingly manipulative woman who used her at a low point in her life. Even though I am not as into this track as many others, it does use its three minutes on the album to further support the band’s wonderful craft of blending mixed emotions into music. To state these things about an emo album of course seems redundant, but it is the craft that Moose Blood brings to the table that allows them to stand above a well-worn and somewhat tropey subject matter and genre.

Track 5 of the album, titled “Glow” tells what could be either a metaphorical or literal account of a father leaving his family behind. Potentially the most accurate response to the situation is how Moose Blood portrays it with the lines, “Wish you were in a better way, But now it’s done and I’ll move on” while implying they haven’t fully moved on. The singer admits they weren’t okay with what happened. As with Knuckles it becomes obvious that closure is not possible and self convincing may be necessary to be able to work out what happened emotionally, even while outwardly trying to move on.

Cheek is probably the best song on the album and is the exemplification of some of the core conflicting emotions that this style of music is about. So many feelings that fight with logic and how a single comment can make you second guess how you really feel about someone.  A mundane conversation with a woman that is in love with someone else can be so difficult when you love said woman. The song is about living as a friend for someone you want to be more, the inevitability of that affecting how you see their partner, and how even an offhand comment of affection could hurt so bad. Moose Blood’s power to convey these emotions in a description of mundane conversations backed by such solid musicality is top notch.

I’m not 100% sure about the meaning of Sway. To the best of my knowledge it is about an annoying roommate that everyone hates who constantly swears he will change. Sonically I am into the feel and mood of this song, but it is probably the track that I understand the least and thus isn’t as strong as the rest of the album. Melodically it is still very compelling and will stick with you for a long time.

Shimmer is another expertly crafted song controlling the melody and tempo in a way that drives home the story about loving someone so much more than they love you. It is about a relationship with disparate differences in how the individuals in the relationship see the relationship itself. The singer can tell so much about the way his partner kisses, but ironically and in a way that reeks of hyperbole ponders if she would even recognize him on the street. The way the melody stays in the lower register emphasizes not only sadness, but disappointment and bitter acceptance of the inevitability of more pain. When the guitars wail on this track it brings a different side then the rest of the album in the form of raw pain represented in the distortion of the guitars which are clean on the rest of the song.

Spring is a somber song portraying an account of a close one that seemingly took their own life. It is an honest questioning of their friends pain and experience. The singer recounts happy memories, and the emptiness that now accompanies those memories hand in hand. Even after three years, the singer understandably can’t make sense of the situation or the reasons it ended the way it did, believing in an afterlife to help ease the unresolved ponderings of what happens to those left behind when someone commits suicide.

Freckle is written from a different perspective. What if you were in a relationship that you desperately wanted to succeed while knowing every sign points indicates deterioration? The constant fighting and nagging in a relationship defined by strife instead of harmony is almost certainly going to end in termination, but war is better than loneliness right? Right? Blush wraps up with another stellar track in which the honesty of how people think about their problems in their own head is put front and center, regardless of whether it seems stupid to endlessly ponder these questions on paper.

A mastercraft in living incongruously with your feelings, Moose Blood’s Blush delivers track after track a stream of consciousness in such a down to earth way that makes me unable to put this album down. The melodies of each song are not only catchy, but impactful and effective at bypassing the logical portion of the brain and entering straight to the gut. Blush is about the paradoxes of relationships that are less than perfect, and the minute to minute contemplations of what steps to take at any given point.