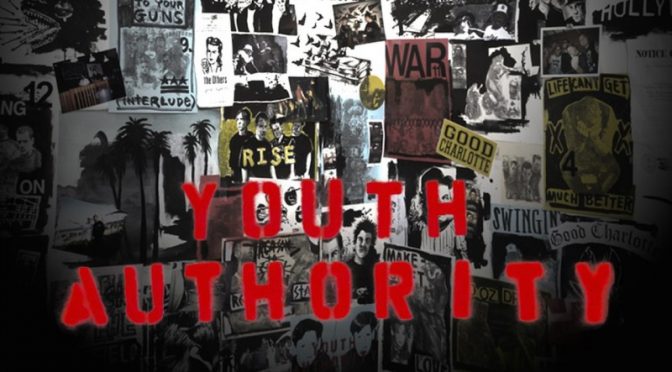 Good Charlotte’s 6th album, entitled Youth Authority is the first album released by the band after a long hiatus. The band, now having been together for 20 years is approaching this release as grown ups who have mostly made their peace with the ongoings of life in a scene that spawned from groups of angry teenagers who needed a release. This makes for a very different thematic attempt at a new feel for pop punk that has its hits and misses.


Young Authority begins with a biographical recounting of the story of Good Charlotte as a band. The opening track of the album, Life Changes establishes lyrically how the band has grown up and sonically it establishes a more relaxed and cheery sounding tone and attitude in contrast to the complaining and anger focused on in their youth.

Makeshift Love takes a step back from that more mature perspective as a pop / punk / emo song blended with a more modern pop song that makes it one of the best tracks on the album. A medical metaphor for making up with a partner that you are fighting with would easily fit in the pantheon of older GC work and their chosen genre as a whole. More modern production values combined with the melodic harmonies are reminiscent of GC’s most famous album, The Young and the Hopeless.

40 oz. Dream is a song that is essentially the newest generation’s version of the song 1985 as made popular by Bowling for Soup. GC takes a nostalgic look back on their life and current trends only to realize that they are old and times have changed. (“Now all the punk rockers are over 40, They’re coaching little league and reading stories“) The track has a somewhat familiar sounding generic pop/rock feel that I feel like I should think is a cheap cash in, but I can’t help but identify with the sentiment of the song, which seems like it comes from an honest place. Everyone can relate to looking back to a portion of their life that they enjoyed most and longing to spend another day there.

Life Can’t Get Much Better comes across as one partner in a relationship trying to remind a potential breakup of all the good things about their relationship together. It is written from the perspective of someone who desperately misses their partner and doesn’t want to lose all that they had together. The thing that makes it rise above however, is its almost blindly hopeful tone. The writer truly believes that the relationship will be restored and has invested themselves in that idea regardless of how they will feel if they are wrong. I think this might be the closest thing that this album gets to some of the raw emotional edge that could be heard on their previous work.

Keep Swingin’ is a track attempting to play off of any critics of the band who has implied over the years that they have “sold out”. One of the biggest criticisms of the band came from their 2007 “Good Morning Revival” album where their sound had conformed very heavily to trends at the time and lyrically the band seemed to joined the “rich and famous” they railed against on their breakout album The Young and the Hopeless. GC uses this track to say that they’ve always stayed true to the band’s core and played honest representations of themselves. The track works in parallel with previously mentioned “Life Changes” to say that this album is who they are now.

Reason to Stay, which features scottish band Biffy Clyro’s Simon Neil on a verse seems to be an opposite sentiment of that in Life Can’t Get Much Better where the protagonist of the song is begging their partner to give them a reason to stay in a relationship that seems to have a rift growing. This song is catchy enough, but the Simon Neil’s inclusion seems throwaway and pointless and the song itself is somewhat kitchy in a way that feels a little bit forced by its subject matter to be emotionally important, while remaining kind of plain.

Stray Dogs, once again, focuses on a guy trying to get a girl to stay with him, but this track is the most forgettable throwaway song on the album mostly because lyrically it is not only dull, but a bit stupid. Lyrics like “Don’t leave me stray, I’m just a dog without you” and “I’m giving you the same old speech again, Like they do on CNN” are accompanied by nothing gripping musically. This track should have stayed on the cutting room floor.

The next three tracks (Stick to Your Guns, The Outfield, and Cars Full of People) begin a string of songs where the band actually attempts to assume their role of the “Youth Authority”. Stick to your Guns is a 1:29 long encouragement for someone to keep trying to live their dreams, while The Outfield similarly tries to relate to someone trying to get their start now. The Outfield is a more biographical relation of the struggles of the band’s earlier era (note obvious reference to their magnum opus). (“We were the young and hopeless, We were the broken youth, You’re not the only one they used, I was in the outfield too”). This song also seems to be pushing people to keep grinding. Cars Full of People has a good melody and relates the reality of the odds of making it with so many people telling them that there is no way that they could. While musically the song is enjoyable, this becomes the third track in a row with essentially the same message with no additional themes introduced. I would hope that as the Youth Authority, there might be additional wisdom that GC could offer their proteges, but it seems that continuing in the face of adversity is their entire message.

War is back to relationship struggles. Once again the concept is fighting with a significant other. It seems that the song mentions warring against their partner, but also when push comes to shove, they will defend them against the world. This track contains the only real hint of a darker sound on the album and even with its repeated subject matter again, I think it introduces enough new sounds that it doesn’t feel like a complete rehash of the previous relationship related songs on this album.

The final track on the album is the acceptance of an ended relationship. The closing out of this relationship is both mutual and regrettable and the singer wants the summary to be good memories of the best parts of their love affair. (“We’re not breaking up, we’re just moving on.”) Unfortunately, I can’t really connect with this song. The message of the song seems to only come across on the surface and doesn’t really seem to musically hit home. It isn’t a bad track, but doesn’t stand out in a way that feels impactful.

Ultimately the album really boils down to a basic pop / punk album from the perspective of some older guys trying to get back into the game. They encourage the youth not to give up on their hopes and dreams and have some failed relationships along the way. With the title Youth Authority, I would have expected to hear more detailed insight from a band that has come full circle on being nobodies who made it famous back to a band who doesn’t fully know where they stand in culture anymore. While fun to listen to, the album doesn’t really stand out as a unified piece of work. Certain tracks are likely to get listened to repeatedly while others will be left by the wayside lost to the test of time leaving about half of a good album.