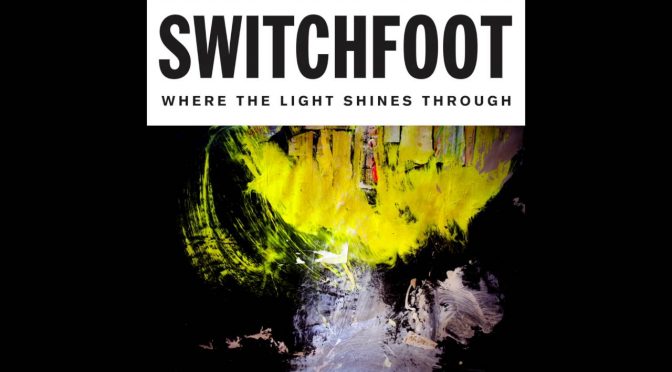 Switchfoot is back with their tenth studio album and this time with the producer that helped them with their three biggest albums, The Beautiful Letdown, Nothing is Sound, and Oh! Gravity. The album doesn’t copy any of those three albums, but rather has bits and pieces of effects and filters that remind one of those greats. For the most part, Switchfoot is able to play off of their older work, creating something new and enjoyable, only rarely coming across as copying anything they have already made.

“Where the Light Shines Through” album starts off with a thesis statement of “Because hope deserves an anthem”. The opening track, “Holy Water”, is a plea for authenticity and revival. The tonal and lyrical aura of this song establish the concept behind Switchfoot’s most spiritual album in years. The track itself is catchy and the bridge is good stuff that does seem reminiscent of some of Switchfoot’s midlife albums, The Beautiful Letdown and Nothing is Sound, but unlike Nothing is Sound, the overwhelming vibe of Where the Light Shines Through is positive and encouraging.

“Float”, the second track on the album explores a new sound for the group. Tim Foreman gets to explore a fun bass line while the guitars focus on a sound that somewhat resembles a disco back track and sound quality. While the feel of the song is a departure, I think they pull it off in a way that can stick in your head even after the song ends. Unfortunately lyrically the song is rather shallow “screw the haters” sort of ditty that doesn’t hold up to much introspection.

The title track of the album carries an uplifting message similar to Nothing is Sound’s, “The Shadow Proves the Sunshine”. The song’s emphasis on the light shining through dark times is accompanied by a relaxing and peaceful melody backed by a “back porch chill” kind of  light rock guitar lines. Foreman argues that the scars we have will stick with us forever (“the only tattoos I have are scars”), but don’t define who we are (“the story that brought us here ain’t the thing that changed”). The song even seems to emphasize the tribulations could be blessings in disguise with the repeated line “Well Mama, ain’t’ the scar like a vision of grace”.

“I Won’t Let You Go” is a wonderful song emphasizing loyalty to someone even during hard times. With a sound somewhat harkening back to a little bit of an “Oh! Gravity” feel, Foreman’s beautiful voice comes across as a sweet, earnest promise of love while the music surrounds the message of the lyrics and crescendos and decrescendos perfectly with each musical phrase. This is one of my favorite tracks from the album.

In a track about putting our priorities in perspective, “If the House Burns Down Tonight” is an anthem chanting “If the house burns down tonight, I got everything I need when I got you by my side, and let the rest burn”. The track tells of a mental reckoning of the things that matter in one’s life and the abandonment of those things that are frivolous as they, “[are] draining me dry making a ghost of me”. Obvious nods to some of the production of The Beautiful Letdown come across in the intro to this song with the early build up of this song with the chosen bass filter.

The spirituality of the album is perhaps most clear in the song “The Day that I Found God”. The gist of the message in the song is that losing yourself is the key to finding God. While the song is not specific in any of its doctrinal assumptions, one could relate the feelings portrayed in this track as the peace that comes with a correct repentance and understanding of sovereignty. I think it might be incorrect to read that much into the track however and take it as the more basic and clearly presented message that the problems in one life are self-caused and God eases those burdens. One is likely to see the spirituality they want to in any given Switchfoot song however, as the focus seems to be on the emotional response to the events described as less about any theological concept.

Unfortunately, there are some tracks that I really didn’t care for that much. The offenders in question are Shake This Feeling and Live it Well. As one of the singles released in anticipation for the album, “Live It Well” has been out in the public for a while. Unfortunately, this is what I feel is one of the worst tracks on the album. Lyrically, Switchfoot has broached the broad subject matter of living life to the best of one’s ability repeatedly in similar ways on every one of their albums ever. On top of that, this track specifically seems to feel like an extra track that didn’t fit on Fading West or The Edge of the Earth EP. That isn’t to say that it is a bad track, just that it feels like a mediocre re-run of a tv show you’ve seen before. Shake This Feeling musically also feels like a track that’s bit sitting for a while and didn’t fit on another album and lyrically just feels like generic “pick yourself back up and try again” chant.

A rarer inspiration, “Bull in a China Shop” almost feels like it takes musical sounds and queues from Learning to Breathe’s “Poparazzi” or maybe even some of their The Legend of Chin or New Way to be Human. The message of the song is pretty much just one of being amped up for something, and while I don’t necessarily think the whole song comes together as well as I’d hoped, it is still has a good beat that you can bop your head to and will stay with you.

“Looking for America” marks a very different sound and feel for Switchfoot that doesn’t come together as effectively as you would hope. With a Lecrae feature and as the only track on the album that even feels “darker” at all, the song seems to question the greatness of this country. The subject matter of this song has been done before to better results previously (Politicians from Nothing is Sound and American Dream from Oh! Gravity), and while the Lecrae feature makes sense with his current message of social justice in our country this song almost feels cheesy as a whole. It isn’t the individual pieces of this track that cause it to not be great, it is the execution.

Immediately bringing to mind Oh! Gravity’s “Ameteur Lovers”,  Healer of Souls is a relatively generic plea for people to run to the “healer of souls” to fix the everyday problems that we have. Once again, as a Switchfoot song, people will read as much or as little meaning into the relatively unspecific messages in this song as they would like, but musically the song has a good build up and is fun and could easily be a great windows-rolled-down singing at the top of your lungs song that will undoubtedly be a great song to experience live.

The final track of the album, “Hope is the Anthem” does a better job of using some of the sounds Switchfoot experimented on with their last two outputs without feeling like a carbon copy. It wraps the album up with a spiritual bow implying that hope (presumably in a deity though individually the song could be referring to a lover) is the Holy Water referred to as the fuel of one’s fire in the opening track titled the same. Feeling equally cheesy and also genuine somehow, this song brings it all back around in a circular theme that I think succeeds more than it fails.

Though Where the Light Shines Through goes back for inspiration from their previous sounds relatively frequently, for the most part it doesn’t feel lazy or contrived, but instead a loving homage to those things that probably got you into Switchfoot in the first place. While not a perfect album, or even Switchfoot’s best, the album is definitely listenable and will most likely be enjoyed by people that are already on board for Switchfoot’s blending of spiritual theming and light rock. While I don’t think the album will convince any Switchfoot haters to come over to the light side, I personally enjoy it and will be listening to it along with the rest of their catalogue for years.
ULTIMATE SCORE: 4/5 Stars